In the 1960s a filler was developed in the UCL conservation department as an alternative to plaster, that was used into the 1990s to treat a wide variety of materials. Applications included the reconstruction of ceramics, filling wooden objects, adhering and reinforcing fossils, and repairing musical instruments. This filler was called AJK dough, and was made by kneading together Alvar (polyvinyl acetate), jute flock and kaolin powder with a solvent. Butvar (polyvinyl butyral) was used from 1980, when Alvar ceased to be manufactured, creating a very similar material called BJK.

The adhesive used makes the filler very strong and because it is a thermoplastic, the dough can be manipulated by the application of heat. There can be a significant amount of shrinkage as the solvent evaporates, so the filler was often applied in thin layers or allowed to pre-shrink (as in the method below).

During the 1970s AJK was often use to fill large gaps in archaeological ceramics. The following procedure was used:

For some applications the appearance of the AJK, brown and fibrous, was advantageous because it blended in well with the object. This is the case for many fossils. In other instances the appearance was disfiguring and the AJK was painted, with varying success. 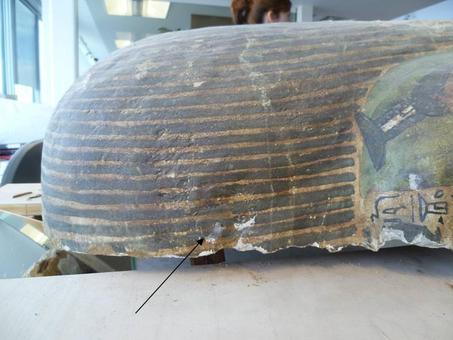 Treatment of an ancient Egyptian coffin

In 2011 I treated an ancient Egyptian coffin belonging to Djeddjehutyefankh (Djed) in the Ashmolean Museum. It had previously been liberally filled with AJK, which was now considered to be disfiguring. Some areas of AJK were removed, which revealed the original object beneath.

Removal of AJK from Djed's coffin
On other parts of the coffin AJK had been used to fill cracks caused by the original manufacture using multiple pieces of wood. When humidity changes, wood absorbs or desorbs water and changes shape slightly, as does the gesso used to decorate it. The AJK does not absorb water so does not change shape like the wood. Along the cracks the AJK had held the edges too strongly when the wood had moved, and had caused the gesso to crack and separate. In these areas the AJK had to be removed to free the gesso, which could then be re-adhered to the wood in its original position. 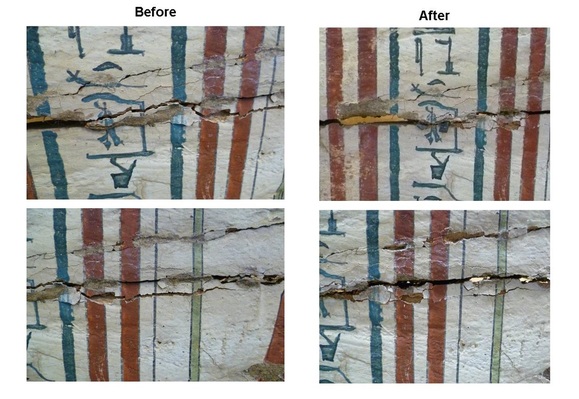 A third situation occurred where the AJK had been used to fill large gaps in the sides of the coffin. Here the AJK was removed, for fear of damage to the gesso and/or wood, and the holes filled with a more appropriate moisture sensitive material (Klucel G and paper pulp).

In yet other areas, the AJK had caused such severe damage to the gesso that removal of the AJK would have put the decoration at risk. In these places the AJK was left in place but covered in spider tissue that was painted to blend in with the decoration.

Use of AJK on geological specimens

AJK / BJK dough has been extensively applied to fossils and other geological specimens as a filler and a bulky adhesive because the colour blends in well and the dough is very strong which holds the heavy pieces.Used on:
• fossil and sub-fossil bone (Larkin & Makridou 1999)
• deteriorating shaley-coal blocks (Howie 1979, 277)
• bones in a clay matrix (Kermack et al. 1973)
• in a grid on unsupported areas eg skulls (Cornwall 1974)
• built up around metal rods/wires to fill long shafts (Rixon 1976, 30)
AJK dough is non-aqueous and so recommended for use on pyritic fossils (Howie 1979, 276).

Williams, N., 1992. The Sutton Hoo Helmet. In: A. Oddy (ed.) The art of the conservator. London: Published for the Trustees of the British Museum by British Museum Press, 73-88.