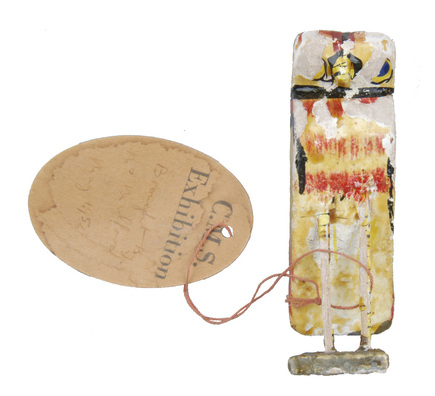 The object is a wooden figurine of an owl representing the Hindu goddess Lakshmi. The quality of workmanship on the object suggests that it was a mass-made item, made perhaps for tourists. A paper label attached to the figure with a thin cord reads “C.M.S. Exhibition. Brought by M˚ Milford May 1952”. It is constructed of wood, gesso and glaze.

The wooden body was in good condition.

The gesso layer had in many places flaked away, exposing the wood beneath. This was especially the case around the face and chest, and on the legs. In other areas, especially edges, the gesso remained intact, but the paint and glaze layers had been lost. In places just the glaze had been lost, putting the paint beneath at serious risk, and in these places the paint was often curled and detaching. The glaze was still present over much of the surface, and these areas are in better condition, but the glaze towards the edges of damaged areas was often smashed and falling off.

Most of the gesso and above layers were missing from the legs, although a few fragments of painted and glazed gesso remained. There was evidence of gesso over the rest of the legs that indicates they were originally covered with the layers of gesso, paint and glaze. The figure’s left leg had two splinters, one beginning from about 1cm below the top and extending to almost the full length of the leg, with two fragments of painted and glazed gesso still attached; the other was about 1cm long and extended from the top of the leg.

The unglazed area between the bird’s legs has the original paint layers still intact, but they are curling and in danger of being lost.
There were missing lumps of painted, glazed gesso from around the ends of the legs, especially where they meet the base.


Much of the front surface of the figure was covered in quite a thick layer of dust/dirt that was obscuring the colours in the decorative scheme.

To consolidate the surfaces, either 1% w/v Klucel G in 50:50 IMS:distilled water, or Lascaux 498HV diluted to 50% in distilled water were applied, either with the point of a syringe, or with a small brush. The choice of consolidant was dictated by the nature of the area being treated. Klucel G was found to dry matt and cause no staining on areas of wood and gesso, but the IMS used to put Klucel in solution was found to slightly dissolve the glaze. Lascaux 498HV dried slightly shiny, which did not match the appearance of the gesso but was fine on glazed areas, and the water with which the Lascaux was diluted did not affect the glaze. Therefore, in glazed areas, or areas of shiny paint, dilute Lascaux 498HV was used as a consolidant (including between the legs of the bird), and in areas where the gesso needed stabilizing, Klucel G was used (along moist of the damaged edges). In many places both gesso and glaze were present, and then the most sympathetic material was chosen given the layout of the area and the amount of control that could be exercised over the spreading of the consolidant.

Klucel at a concentration of 1% was found to be the correct viscosity for the task – viscous enough to form individual drops and not spread rapidly over the surface to which it was applied, but liquid enough to soak into the top of the layer to which it was being applied. If applied to a layer of gesso, it tended not to soak into the wood below (depending on thickness of gesso, in this case a bit less than 1mm). Lascaux 498HV is very thick, but can be diluted with water to the desired consistency. It was found to form a rubbery film if applied too thickly, and was less able to soak into a porous surface (such as the gesso or wood) when applied).

Gesso flakes that were lifting on the legs were re-adhered with non-dilute Lascaux 498HV where it could be inserted underneath, because it is a stronger adhesive than Klucel G. However, on paint flakes underneath the beak Klucel G was used because it relaxed the paint flakes, which then lay closer to the surface, while adhering them at the same time.

Surface cleaning was done with a small soft brush and a Museum Vac vacuum with netting over the nozzle. This was done after a certain amount of consolidation, mainly around the neck/chest area of the figure, because the gesso and paint flakes were too delicate to be cleaned before consolidation.