There are smooth ridges around the inside of the jar that initially suggest coiling, but the ridges are spiral; this plus the nodule of clay in the centre inside bottom of the jar, plus its almost consistent thickness, suggest that the jar was wheel-made, probably on a slow wheel. The exterior bottom third of the jar is roughly lined on the outside, indicating it was turned on a wheel to remove excess and create the concave drop-shaped base.

According to the UCL Collections record, the jar dates to the Late Bronze Age (approx 1400 BC, also Egyptian eighteenth dynasty), from Tell el-‘Ajjul, 6km south west of Gaza, perhaps biblical Sharuhen, excavated by Flinders Petrie in the 1930s. The jar was excavated from a tunnel containing no body, along with three other jars of this type, and two other pots of types 74K3 (red lustrous ware spindle bottle) and 12G4 (small bowl). The jar is Egyptian in form, although it is difficult to distinguish imports from Palestinian copies. Petrie records it as a new type, 31H2. These tunnels remained open until the 18th dynasty, as shown by the Egyptian drop-shaped pottery, such as this jar, found within them, and there are seals of Egyptian kings at the site, and part of a jar impressed with the cartouches of Hatshepsut and Tuthmoses III, which may indicate an Egyptian presence.

The jar was offered for treatment in 12 pieces. The adhesive previously used was clear/white. A hard, grainy accretion at the corner of re-joined sherd at the rim was possibly an insoluble salt deposit. There was a crack all the way through the body from bottom edge of section to the base of the re-joined sherd at the rim. Cracks had formed on the underside towards the bottom of the top section, forming what would have become another sherd if allowed to continue.

The ceramic body was in good condition, with no friable surfaces or evidence of salt damage 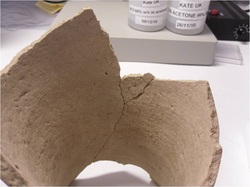 Small sherds in repair inside ceramic
The whole of the ceramic, was cleaned with Smoke Sponge to remove museum dirt and dust. Wet cleaning with cotton swabs and acetone was undertaken only to remove old adhesive at the rim and where it had been spilt below the rim.

The previously attached sherds were removed by placing the top and bottom sections of the jar in an acetone atmosphere for three days. This loosened the adhesive to the extent that the sherds could be separated with very little applied pressure. There was a substantial amount of old, brown, brittle adhesive (cellulose nitrate) around the sherd at the rim. After removing the sherd, this was removed mechanically and with acetone. The adhesive had shrunk, pulling off a thin layer of the ceramic, so, unavoidably, a very small amount of the original surface was removed with the adhesive.
All sherds were rejoined using 60% w/v Paraloid B72 in acetone. The two smallest sherds were too small for their position in the object to be identified, so were not included in the repair. The other small sherds formed the inside surface of the jar behind a larger sherd, so are no longer visible (see left). Together, the pieces formed a complete vessel, except for the two missing areas on the rim.
No loss compensation was carried out, by the request of the owner.

The jar is now whole and complete excepting the two missing areas on the rim. It is in a much more stable state for handling, and the shape of the jar can be fully appreciated. If the other sherds are found they can easily be inserted.

The jar is now stable, so should need no further treatment. However, the storage is open so it is likely that over time it will become soiled again, and may require some light cleaning. This can be done with Smoke Sponge, or a brush and vacuum.

Handling, as ever, should be careful and considered because ceramics are breakable. If the missing sherds from the rim are found they can be attached using the same method as the other sherds.