The objects are three iron blades of varying sizes and degrees of preservation.
The objects were excavated from a small lake-side cave, called Mweru Cave, in Northern Rwanda, the earliest archaeological deposit. The layer was carbon 14 dated to 1045 – 1214 AD, the Late Iron Age. The iron objects were found in association with twisted-string roulette-decorated ceramics and knotted-strip roulette-decorated ceramics, which are consistent with a Late Iron Age date. No iron production remains were uncovered from the site, in fact from twelve previously unpublished sites, only two had any evidence of iron production, leading the excavators to conclude that “the local geology prevented iron production on the scale seen in the south and central zones [of Rwanda] because the necessary components for iron production were not in plentiful supply”. Thus any iron objects that were produced, or imported from the south, must have been coveted, and iron would likely have been used for objects of status and/or saved for use in specific utility objects for which other materials were less suitable.

The objects arrived for conservation in five pieces in a substantially corroded condition and covered in soil. Mineral preserved organics (MPO) were visible on several of the pieces, and metal was clearly still present.

An X-ray revealed more information about the object (see below). The dark areas are where metal is present.
Section 1 was revealed to have a pointed end and a broader end, it appeared to be the bottom section of a blade welded to a tang (a welding line is just visible on the original X-ray). The parallel lines around the tang and the blade supported the evidence of mineral preserved wood on this section. The break edges of Sections 3 and 4 were found to be similar, and it was thought likely that these pieces join together; on both of these, parallel lines on the X-ray indicated that mineral preserved wood is present. The lighter and darker sections of Section 5 was thought to show that the soil contained a thin section of iron which is bent over at the end (the darker section); this piece could not be associated directly with any of the other sections. The X-ray of Section 2 revealed a central iron core, surrounded by corrosion (cloudy areas), as was supposed from visual examination. 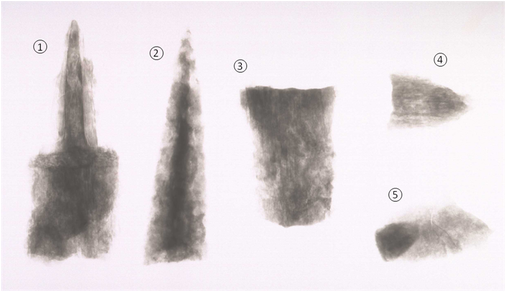 X-ray of the object before treatment
Red/brown corrosion products, almost certainly hydrated iron oxides, were abundant on Sections 1-4. It was unclear if the corrosion was still active, the surfaces of metal and corrosion were extremely friable and delicate, and much soil was present in and around the corrosion, thus pieces becoming dislodged did not necessarily prove the presence of active corrosion.

Section 2 had visible areas of metal that were laminating and coming apart, with a bright orange powder between the layers apparently causing the problem; the orange powder was thought to be akaganéite, and probably indicated continuing corrosion. This was supported by the presence of pieces of Section 2 from the tip that had been forced off by the inter-layer corrosion and were still present in the acid-free tissue with the object.

Without treatment, not a lot could be learnt about these objects, including technology or original dimensions. In some cases there was clearly ongoing corrosion that was causing damage to the object, which would eventually lead to it completely falling apart. By treating the objects, much more could be learnt about them, corrosion could hopefully be halted, or slowed, and they could be prepared for display in the National Museum of Rwanda, for which they were not fit before treatment.

Initially, cleaning was done mechanically with a combination of brush, wooden stick, and scalpel. This removed most of the soil, and allowed the objects to be seen much more clearly, and their condition to be reassessed.

Sections 1, 3 and 4 had a great deal of MPOs across their surfaces. Cleaning the soil from Section 1 revealed a substantial amount of the original wooden handle, including a part of what appears to be the outer surface of the handle. Sections 3 and 4 had been covered by a wooden sheath. The grain of the wood used for the handle and sheath was parallel with the length of the object. Some of the wood had been preserved still pretty much as wood, and some had been preserved into the corrosion products, or as powdery yellow/orange clumps that held the shape of the wooden surface. There were also a lot of carbonised remains of wood, some belonging to the object, and some clearly unrelated chunks of charcoal. Where these met it was difficult to distinguish between them, and often the grain of the handle/sheath was used as an indicator.

Section 2 was covered in bright orange organic remains, but these had no structure at all, and no grain, were short and randomly scattered across the surface. These organics seemed to be unrelated to the object, probably organic remains from the soil surrounding Section 2 in burial that had been preserved by proximity to the corroding iron. Thus these were cleaned off, mainly by scalpel.

Section 5 was found to be what the X-ray had suggested – a folded blade (or tang and bottom of blade). This also had some unstructured orange organics scattered across it. These were also cleaned off by scalpel.

After the soil and unassociated organics had been cleaned off, the objects were seen to be quite corroded. Some of this corrosion could be removed with a scalpel or pin vice, but some was far too hard for this, especially some lumps of what was thought to be magnetite on the handle part of Section 1. And in other areas, cleaning with a scalpel was either not precise enough to clean to the “surface” that had been chosen to aim for, or was likely to cause damage to an area of MPOs. In these cases, air abrasive was used to remove the corrosion. This was used at various different powers depending on the hardness of the corrosion (from 40-80psi, with 29μm aluminium oxide powder). This was continued until, for Sections 2 and 5, a smooth(ish) magnetite surface thought to represent the original dimensions of the object was reached, and for Sections 1, 3&4, the large lumps and bumps and misleading sections of corrosion had been removed, and any more abrasive would have threatened the MPOs.

During air abrasive on Section 2, thin sections of long-fibre tissue were laid across the cracks in the metal and held down with 20% w/v Paraloid B44 (an ethyl acrylate copolymer acrylic resin) in acetone, to protect the delicate edges (see left). However, it was found to be rather difficult and time consuming to remove this facing, and ridges of corrosion were left on the crack edges. So this was then abandoned, and air abrasive was done with care and attention.The metal sections, Sections 2 and 5, were coated with five coats of 3% w/v Paraloid B44 in acetone. This was to protect them from changes in relative humidity that were certain to occur on their journey back to Rwanda, and which were very likely to cause further corrosion. On top of this was added a layer of microcrystalline wax, which was mixed with a small amount of solvent (white spirit) in order to make it into a liquid to be painted onto the surface. The solvent then evaporated leaving a thin layer of wax. Wax is more resistant to water than Paraloid B44.

It was not thought appropriate to coat Sections 1, 3&4, due to the large amount of organics present, so they were packed carefully with silica gel. Coating the organics would have made them appear shiny, and less detail would have been visible.

It was found that the join between Sections 3 and 4 was very close indeed, so after the soil had been removed, but before air abrasive treatment, they were joined with 40% w/v Paraloid B44 in acetone.

It was decided to pack the three objects separately, because they make no sense as one group. This was done using polypropylene containers and polyethylene foam covered in spun-bonded polyethylene (Tyvek).

The objects are now understandable as iron blades, and their form is clear.

Sections 2 and 5 are stable, and should remain so unless their protective coating is damaged.

Sections 1, and 3&4 were not coated so these pieces have the potential to continue to corrode. They are very delicate, but should remain stable if they are kept in the air-tight box with silica gel, and not handled.

It is strongly recommend to keep the large dagger with wooden handle in a dry environment, preferably below 20% relative humidity, but since this is unlikely to be practical, below 40%. If it is kept in its packaging, it should be quite safe. But when the silica gel changes colour to green it needs to be changed. It is also possible to create a dry environment within a sealed museum case by using simple buffers such as tissue paper. A great deal of care should be taken if the objects are handled. The organic remains are very fragile and easily dislodged or damaged.

The other pieces, that have been coated, should be fine as long as the coating is not damaged. However, high temperatures may cause the wax coating to become sticky and pick up dirt, so ideally they would be kept below 25°C.