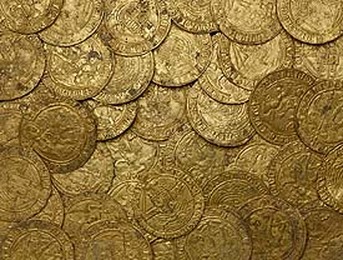 The Asthall Hoard is a group of 210 gold coins dating from the Tudor period. Treated Jan-Mar 2012.

The coins were discovered under the driveway of a volunteer at the Ashmolean Museum during building work by a JCB driver and his friend in 2007. In 2010 the hoard was declared to be treasure and valued at £280,000.

The coins span the period 1470-1526, a time that covers the Wars of the Roses to just before the Dissolution of the Monasteries. It was buried during the early period of Henry VIII on land belonging to Eton College, and may be a merchant’s wealth.

The hoard contains some rare pieces and consists of coins called angels and half angels, named for their decorative motifs. Angels were first minted in 1465 and half angels in 1472; an angle was worth six shillings and sixpence, roughly equivalent to £145 today. The coins were not only currency, but also considered to be powerful charms.

The coins had been given a brief clean but still had burial deposits across the surfaces, giving them a dull and dirty appearance. Some coins had dark encrustations that were much more difficult to remove than soil, and some also had deposits that appeared pale and crystalline in nature, that were very hard.

Firstly, the coins were soaked in 50:50 IMS:distilled water for about 10 minutes, then in the same solution, were brushed with a stiff-ish brush to remove hardened dirt.


Secondly, the aim was to try to remove hard white encrustations (insoluble salts?) and dark brown spots / tarnish. The Asthall Hoard is thought to be made of high purity gold, but the exact purity is unknown.
The literature suggested various complexing agents to try to combine with any salts and remove them:
Calgon - used at BM, pers comm.
Acid – Gold is resistant to acid, with the exception of aqua regina (nitric and hydrochloric mixed). Insoluble salts can be treated with nitric or hydrochloric acid, but impurities in the gold (e.g. silver, copper) may cause the object to be etched with strong acid; very dilute (1%) nitric acid is reported as used to remove lime encrustations from gold (Plenderleith & Werner 1971, 214). 15% formic acid v/v can be used to clean gold that may contain copper or have copper corrosion (Hockey 2001, 266).
Di-sodium salt of EDTA (ethylenediaminetetraacetic acid) is a stronger complexing agent than formic acid and may attack copper layers on corroded alloys (Scott 1983, 201). Used on gold objects at 10% in water (Hockey 2001, 265).
After treatment with complexing agents, objects must be thoroughly rinsed.

Coins with white encrustations were soaked in Calgon in distilled water, starting at 1.5% w/v and progressing to 5% w/v after its efficacy and safety had been determined by observation. Encrustations are removed from the object without the need for mechanical intervention if left immersed in Calgon for long enough.

All coins were rinsed in running tap water for at least 2 hours, followed by a rinse in distilled water, then patted dry with paper tissue or allowed to air dry.