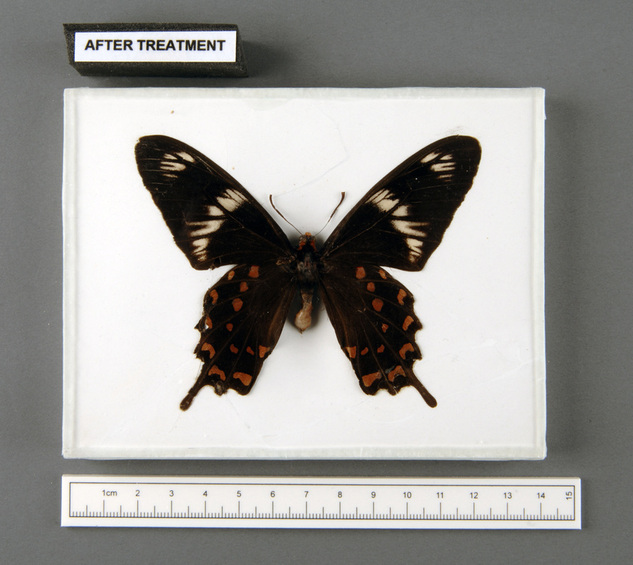 The butterfly was accessioned in 1909. It is mounted on a specially made plaster base which curves inwards in the centre to accommodate the body. The butterfly is a member of the family Papilionidae, species Pachliopta hector, common name Crimson Rose. It lives in Australasia and Indomalaya. The body and spots on the hind wings are red. 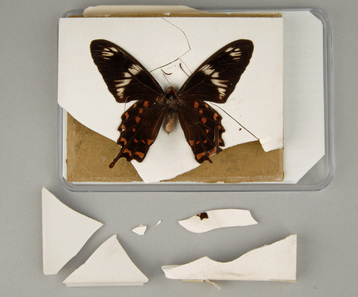 The object had been dropped and the plaster had broken into 9 pieces (7 large, 2 very small), and the antennae snapped in several places. Fragments of wing had become detached from the specimen, one adhering to a piece of plaster and one lying unattached to the right of the butterfly. Gummed paper originally held the card backing, plaster mount, and front glass slide together. This paperhad ripped or become unstuck, causing the card, plaster and glass layers to separate, and leaving a residue on the glass surface. The specimen had faded and was very dusty. 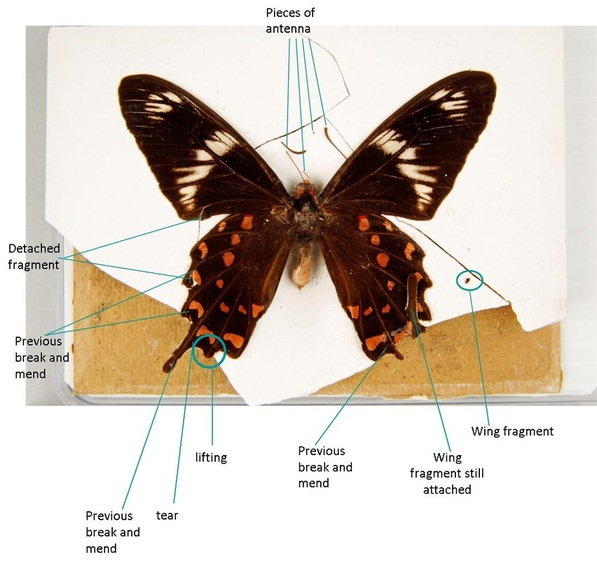 The object was cleaned using brushed to remove dust from around and beneath the butterfly, and tweezers or a soft brush to lift fibres from the wings.

The first part of the object to be treated was the specimen itself, being the most fragile and most important part of the object, and one whose stability would be threatened by treating other parts of the object. To stabilize the specimen, lifting, torn and previously damaged areas were supported and strengthened using 12gsm Tengujo tissue cut to shape and attached behind the wing using polyvinyl alcohol (PVAl). Traditionally, butterfly specimens have been treated with water-soluble animal glues (Brown & Hancock, 2007; Walter et al. 1999); PVAl is also water soluble, and is used in which helps to relax the specimen while treating it, so that it lies flush with the tissue, and therefore will behave in an expected way in the case of the specimen being re-treated in the future. The benefit of using PVAl over animal glue is that because it is synthetic it is unattractive to biological pests, to which entomological specimens are already at risk. The PVAl used on the butterfly is a white adhesive by Lineco that dries clear, called “pH neutral adhesive”; it was used either straight out of the bottle (% unknown) or slightly diluted with distilled water. PVAl can be mixed from dry granules using water as the solvent to produce a clear adhesive of the desired percentage (Woods 1997). The floating wing fragment was re-adhered in place with PVAl (just to the left of the right tail wing). 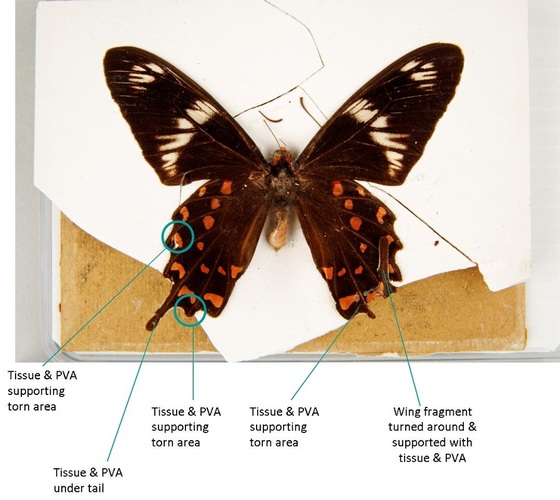 Treatment of the butterfly specimen
The antennae were both separated from the head, and the right hand antenna (on the right in photographs) was missing a section. The 2 pieces of the left hand antenna was rejoined using tengujo tissue coloured with watercolours. A small (approx. 2mm2) piece of coloured tissue was wet with distilled water to make it easier to handle, and laid flat on a surface; the 2 pieces of antenna were laid end to end on top of the tissue; the tissue was folded tightly over the join and a blob of PVAl placed on top of the folded tissue and allowed to soak in. After this had air-dried the tissue was cut as close to the antenna as possible with a scalpel. PVAl was used for consistency with the rest of the specimen, and because it penetrated the tissue well.

For the right hand antenna a new section of antenna had to be created to make it the same length as the left hand antenna. This was attempted using a rolled up section of coloured tissue, but this produced a section that was too thick. In the end a dark brown brush bristle was used, which was cut from a brush with a scalpel and then joined to the existing part of the antenna using the same method as above. Care had to be taken that the curve of the bristle enabled the reconstructed antenna to lie flat on the plaster.

The antennae were attached to the head of the butterfly using a blob of PVAl on each side; the tops of the antennae rest on the plaster but are not adhered to it. 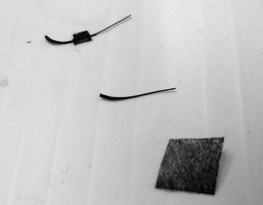 Mending the antennae
The sections of plaster were rejoined by taping the all of the plaster pieces together and then running 30% w/v Paraloid B72 in acetone along the back of each crack. This adhesive was used it is a trusted and strong conservation adhesive, and because water (as found in PVAl) was found to soften the plaster. Damage to the plaster edges after breaking had caused the cracks in the plaster to be very visible after mending, so the cracks were filled using Flügger, a commercial acrylic-based filler consisting of butyl methacrylate and calcium carbonate (Pohoriljakova 2010). The white paste was painted in with a small brush and then the excess removed with a scalpel and smoothed with an acetone swab.

The glass was cleaned using distilled water. Gummed paper adhering to the glass but not the backing was disposed of; a section of gummed paper extending from the upper edge of the cardboard backing was retained for historic interest. Strips of 12gsm tengujo tissue were adhered along the edges of the glass with PVAl. In this way the butterfly was protected from the ingress of dust.

Pohoriljakova, I., 2010. The facts on Flügger ® Acrylspalter: A study of the properties of a commercial filler. Conservation and the Eastern Mediterranean: Contributions to the 2010 IIC Congress.

Woods, C., 1997. Polyvinylalcohol adhesive solution: Information and directions for production and use. http://cool.conservation-us.org/byauth/woods/pva.html