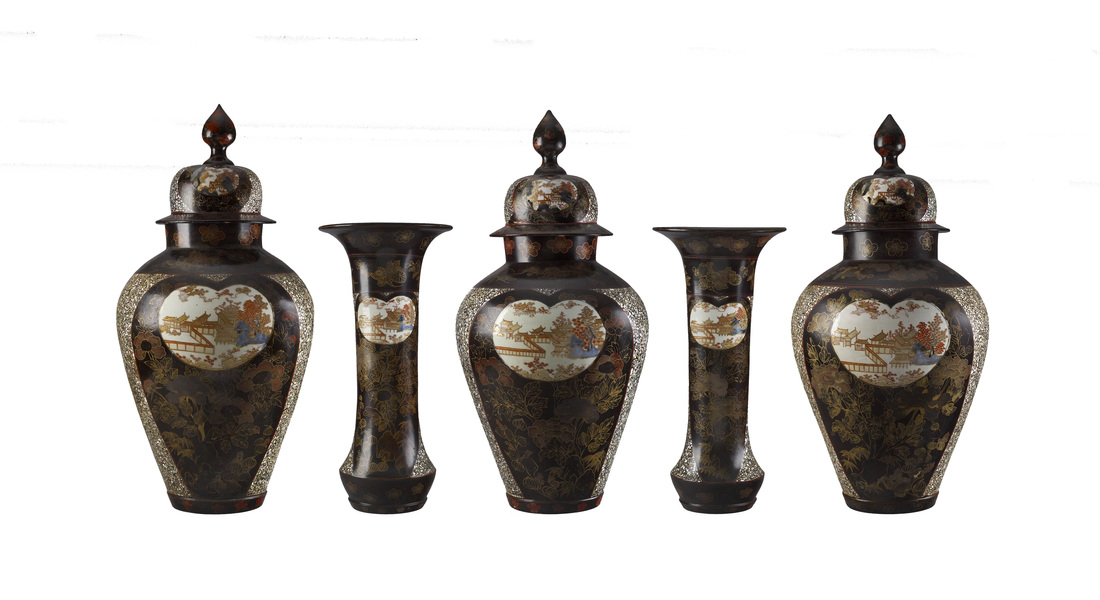 Imari is the name of the port, near Arita, from which Japanese export ware were shipped to Europe. “Imari” is a description of the colours used in decoration – blue underglaze, red and gilded.
The objects were purchased from Althorp, the Spencer family home. The family has had them since the early 18th century, when they were probably ordered specially by the 1st Duke of Marlborough and his wife Sarah, who was keen on oriental porcelain. Garnitures of this type (usually not lacquered) were fashionable in stately and princely houses from the end of the 17th to the beginning of the 18th century, and demonstrated wealth. They were manufactured specifically for the export market in “european” shapes (not Japanese taste). A collector remarked on Imari “They got a lot of decoration for their money”.
Other examples of lacquered porcelain are known, Dresden has a large collection of lacquered Imari, all of which is described in 1721, soon after their manufacture and arrival in Dresden, as being “very defective” - parts of the relief decoration have become detached or fallen off on most of this group.

The areas of porcelain to be lacquered are usually left unglazed, the area indicated by painting with underglaze blue. This unglazed porcelain turns a pinkish-orange colour when fired, which can be seen where lacquer is missing.

A ground is often applied to the unglazed ceramic, made of urushi (lacquer) or animal glue plus clay/granules of some type. Layers of black urushi are applied over this thinly. Good lacquer is made up of many, many layers. 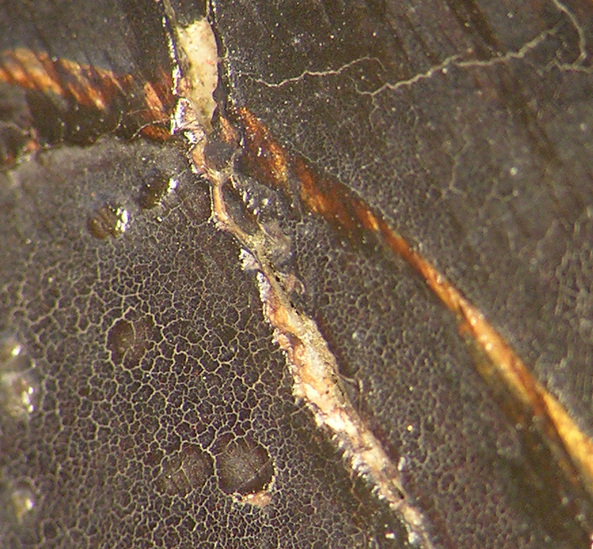 Close-up of a crack in the lacquer revealing the white porcelain beneath, with a thin layer of red ground applied, and the lacquer on top. Height approx 5mm.

The objects appeared to have been coated at some point in the past with a resin which had yellowed, giving the porcelain windows and mother-of-pearl areas a yellow tinge. The resin did not appear to be causing any damage to the objects, but was affecting their appearance. It is likely that this had been applied to improve the appearance of the lacquer. UV damage to the lacquer caused the fine cracking visible in the picture above, which would have dulled the lacquer.

All of the lids and one of the pots had been severely damaged at some point in the past and re-adhered. On the lids the areas of damage were visible in places from missing lacquer, and on the porcelain by cracks, missing ceramic, fills and in/over-painting, which varied in skill of application, but were mainly thought to be possible to improve upon. The breaks on the pot had also been mended and a significant area of mother-of-pearl lost, filled, and in-painted. All of the pots had small areas of missing lacquer which showed as an obvious pale colour next to the dark lacquer. Since the entire exterior of all the objects had been coated in resin, the condition of the lacquer was unknown.

It was decided that the resin, thought to be shellac, should be removed from the porcelain areas, but not from the lacquer, because the condition of the lacquer was difficult to assess, and lacquer often has the same solvents as shellac.

Acetone was applied on cotton wool poultices to the porcelain areas to soften the resin, which was then removed by wiping with clean acetone-soaked cotton wool and a scalpel.
Due to earlier breaks and damage, some small areas of lacquer were missing. These areas were infilled with 5% w/v Klucel E in 50/50 IMS/acetone and microballoons. The fill was chosen for the number of possible solvents for reversibility, and ease of workability. The fills were inpainted with Lascaux Studio acrylics.
Some previously mended areas had been extensively over painted, to hide fills. This paint was removed using acetone and a scalpel, back to the fill. The previous fills were left in place, to avoid further damage to the lacquer. They appear to be epoxy with a chalk bulking agent. They were overpainted with an acrylic varnish to make the surface smoother, and then overpainted with acrylics, and another layer of varnish applied on top. No paint was applied to the original surface, which had been significantly covered by the previous painting.

The objects appeared much brighter and fresher, and were put out on display in the galleries. It is hoped that they may be worked on in the future by an expert in lacquer conservation.

Lacquer is damaged by UV light, and whilst damage has already been done to these objects, it is recommended that they are frequently rotated off display.