The bag was collected by a missionary in the nineteenth century for interest in the plant fibres from which it was made, as well as in the object itself. The EBC states that its role is to illustrate “the extent of human use of plants around the world”, and that “the collections build an important bridge between biological and cultural diversity, and are a valuable resource for the study of plant uses past, present and future”.
EBC website

Photographs from the early to late twentieth century taken by anthropologists and other interested parties show both men and women of the Solomon Islands wearing bags similar to the object discussed here.

The plant fibres that made up the bag still had a degree of flexibility, but were fragile, and there were many small breaks. Having been partially treated in 2010, the bag had a three dimensional shape, although still retained many creases from being previously stored flat. There was a large hole down one side of the basket that was treated in 2010 using thin strips of kozo paper that were threaded through the existing weave to provide a structural support. 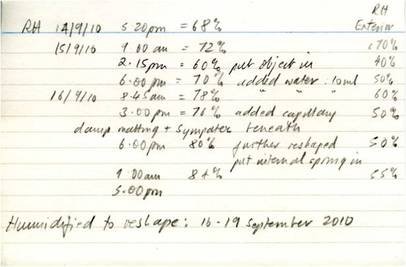 Index card outlining B. Wills’s humidification procedure in September 2010
The basket has previously been treated by Barbara Wills from the British Museum Conservation & Science Department (Organic Artefacts) during a conference on basketry at Kew in September 2010. During the conference Wills humidified and reshaped the bag, using the procedure on the left, which was written on a piece of card inserted in the box in which the object was kept at the EBC. The owner felt that this treatment had not been completed (because it was done as a demonstration only). It was felt that the reshaping could be more extensive, as the basket still bore the creases created from storage.

The object forms part of the EBC at Kew, and is subject to handling by interested parties. Any packaging should therefore make the object easily available to view and to remove from the box.

The treatment was undertaken to provide greater structural strength to the object, to clean it, and to reshape it so its original use could be better understood.

The basket was cleaned over its exterior surface with Groomstick. 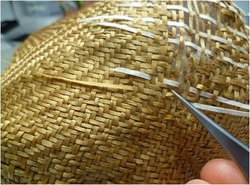 Threading coloured strips of long-fibre tissue
A sheet of long-fibre hand-made tissue of a heavy weight was coloured to resemble the basket fibres using watercolours. This was then sliced into thin strips , which were threaded using pointed tweezers into the basket weave around the damaged areas in the side. The white strips that had previously been inserted were gradually removed as the coloured strips replaced them. This continued until it was thought that enough strips had been woven in that would adequately protect and support the basket. When it was thought that the correct tension had been achieved, the ends of the strips were folded over and stuck to themselves with arrowroot starch paste. 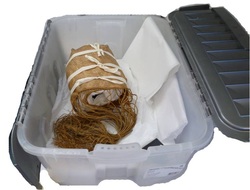 Bag undergoing humidification
The object was humidified over the course of 52 hours in a chamber constructed from a crate and perforated Corex (corrugated polypropylene) held above a shallow reservoir of water in the bottom of the crate. As the object became more humidified, its shape was gradually changed by inserting acid-free tissue into the body of the basket, and tying calico strips around it to constrain the outer dimensions. The alignment of the fibres around the hole in the side was checked each time the reshaping took place. The shape of the object was partly determined by the object itself, but was informed by the ethnographic pictures. The aim was to diminish the sharp creases created during storage. The carrying handles were pinned out in approximately straight lines onto acid-free tissue, but the knots tied in the handles prevented them from lying completely straight

Packaging created for the bag
A custom-made archival card box with removable lid (for display storage in a drawer) was requested by the owner. The collection sometimes gets requests from visitors to examine the objects more closely, and for this purpose, the box was equipped with an internal layer that can be easily removed and the sides dropped to allow the object to be viewed from most angles.

The basket is now in a stable and presentable condition, and in safe and protective packaging. The associated information cards, and a copy of the ethnographic photos are held safely inside the packaging so should remain in association with the object.

The reshaping removed the sharp creases from the basket that were a result of previous storage conditions and unfolded the end attached to the carrying handles, so that the basket now looks much more like it would have done had it been in use.

The coloured tissue strips woven into the side of the basket hold the edges of the damaged area together, and protect them from further damage. They also help to hold the basket’s shape.

Vegetable fibres are prone to attack from insects and mould, so are best kept at a low temperature, and a relative humidity (RH) that doesn’t cause the fibres to dry out and become brittle, but is low enough to discourage mould growth, between 40 and 60%. Fluctuations in RH should be avoided because it causes the fibres to expand and contract repeatedly, which causes stresses and strains to the object. Some dyes used on basketry are extremely sensitive to light, and light can also cause embrittlement, so the object should be kept in its box for the majority of the time, and not exposed to intense light when removed. Strong lights can also cause localised high temperatures, which will alter the RH, another reason to avoid them.

Dust accumulating on vegetable fibres can encourage insects, as well as being mildly abrasive and unattractive to look at, which is another good reason to keep the object in its box as far as possible.

Over time, vegetable fibres become brittle with age. This cannot be permanently reversed, and should be taken into consideration during any handling. The box should provide support in a way that allows the basket to be seen without being handled at all. If handling is necessary, gloves should be worn and great care taken as many of the fibres are very fragile, especially at the end of the carrying handle, and around the hole in the side.